Secrets Of The Stone

Enter Giveaway
My new book Shadows Of Cayhurst: Secrets Of The Stone is being released as an eBook on Amazon Kindle on June the 30th 2020 but in the meantime U.S. members of Goodreads can enter this giveaway for a chance to win a copy.

Next Instalment Of My Fantasy Trilogy 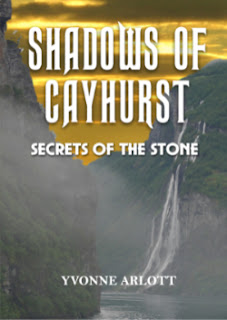 After a lot of work I'm finally releasing my new book Shadows Of Cayhurst: Secrets of The Stone which is book two in the Shadows Of Cayhurst series. It will be released as an eBook on Amazon Kindle on the 30th June 2020 and has just gone live as a pre-order.

I’m pleased with how the cover looks since I think it’s captured one of the settings in the story perfectly. The picture used was one I took from a trip to the Norwegian Fjords. I was in awe of the amazing scenery as it felt like a magical place and a completely different world.

At the moment the book is only available as an eBook but I intend to produce a print version at a later date. 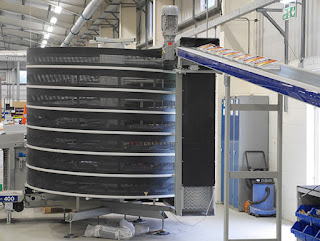 I always find releasing a book a really exciting but also a very scary process. I end up going over and over the manuscript trying to make sure it is as error free as I can make it and worrying if I’ve missed anything. It’s only when I finally sign off on the proofs from the printers and know there is no changing my mind that I can relax since at that point all the work is done and it’s just a case of waiting. 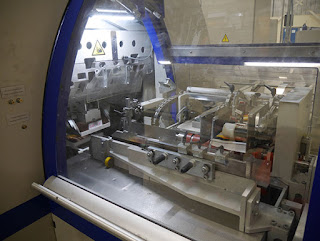 Then when the books arrive it’s incredible to see how all the different parts I’ve been working on have been merged together and transformed into the final book. It just looks so much better when you see it as a paperback rather than a pdf file. It is also such a satisfying feeling to know that all that work I’ve put in has at last culminated in the finished article.

This time around after signing off on the proofs I was given the opportunity to witness the book being bound, which was fascinating and I have included some pictures. 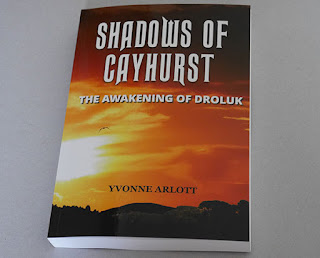 At the end I was also given the first couple of books to come off the press and the rest of the books will be delivered soon.

The eBook version is already available for pre-order.
Posted by Yvonne at 16:21 No comments: 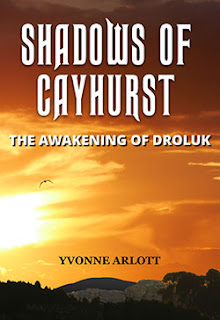 After a lot of editing, proofreading and typesetting I’m finally in the process of publishing the first book of my new fantasy series. The book is set in a fantasy world, parts of which were inspired by the Cornish landscape and coastline. Magic exists there along with a host of different animals and mystical creatures, many of them inspired by legends and myths from across Europe.

I think trying to work out a suitable title was one of the most difficult things to do and I always struggle with it. After a lot of debate and thought I finally decided on a title of Shadows Of Cayhurst: The Awakening of Droluk. Shadows of Cayhurst will also be the overall title of the series.

The book cover was also difficult to decide on since I wanted something that had an exciting, fantasy look. I’m not sure if I succeeded in achieving this but I am pleased with the vibrant colour of the cover and just hope others like it.

I don’t want to give too much more away about the story at this stage but I will be posting some more information about the book soon. In the meantime the blurb can be seen below.

In the west of Aegarn, an ancient power has awoken. Monstrous creatures steeped in shadow sweep the land, relentlessly hunting their prey.

In the village of Fifield, a boy is forced from his adopted home and into a world of adventure. His unusual gifts guide him through an incredible world, and set him on a course that will lead straight into the heart of the darkness…


With giants, orcs, beasts and other creatures in their path, Falrick and his companions must do what they can against the seemingly invulnerable army of darkness. But even as new alliances are made, old grudges and old friends cast their own shadows… 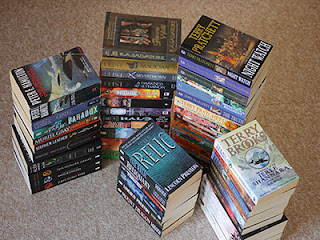 I decided to update my Goodreads author account by adding some information about myself and some of the books I’ve read. After I’d finished I was surprised by just how many books I’d added to my read list, especially when I realised how many classics I’ve read. I think the main reason for this is that when I was a child my mother gave me all her old books, which happened to be the classics, and I went straight from reading children’s books onto reading these. I loved the look and smell of the books and the fact I had to be careful turning the pages because the paper was so old and delicate in some of them. I think that was one of the reasons I really enjoyed reading them so much since not only did the writing take me back to a bygone era but the actual books looked like they came from that era as well.

Unfortunately there are only so many classics that were written and since I’ve always loved anything science fiction, adventure or fantasy I then moved onto mainly reading these genres. I’ve read other genres such as romance, horror and drama as well which I enjoyed but often found they didn’t grab my attention and make me want to keep reading the way a good fantasy or sci-fi can. The biggest problem I’ve had over the years though has been a lack of space to keep all the books I’ve read and so I did move onto reading eBooks. It’s great from a storage and environmental point of view but I have to admit sometimes I still prefer to read a paperback, to me it’s part of the reading experience.

I’ve still got to add more books to my read list since I haven’t even come close to adding all the books I’ve ever read and I can’t even remember half the ones I’ve read from the library over the years.
Posted by Yvonne at 11:50 No comments:

Current Progress Of My Fantasy Trilogy

So once again I’ve discovered being a perfectionist is more of a curse than a blessing. I did have book one completed but I wasn’t really happy with the last 9 chapters of the book even though other people said they were okay and I tried to ignore my doubts but I couldn’t. So I went back to the drawing board and have been working on trying to write a new ending to the book that I find more exciting and interesting. The trouble is I keep getting side tracked writing book two of the now planned trilogy which I’m really enjoying because I have spent so much time working on the imaginary world and characters that it feels like they’ve almost taken on a life of their own.

At the moment I’m pleased with how book two is progressing but it makes getting the ending right to book one even more crucial. Unfortunately this means it is also taking me a long time to get book one finished but I’d prefer to spend the extra time on it and try to make it as good as I can. I guess at the end of the day I’d like the finished book to be something that throws me into an imaginary world full of excitement and conjures up amazing images in my mind when I read it.
Posted by Yvonne at 09:51 No comments: